Music in Advertising: Seeing What You Hear 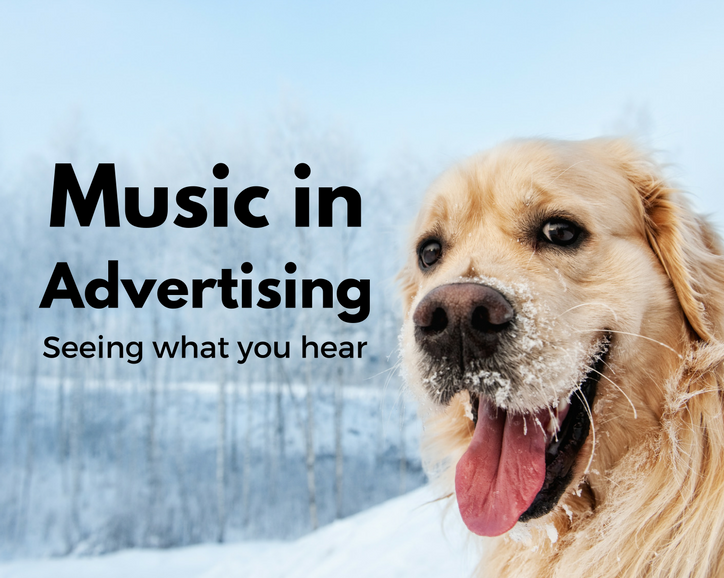 Do me favor? Search Google Images for “puppy.” Now pull up YouTube, Apple Music, or Spotify—or your preferred way to instantly hear music. Now, while looking at all of the cute images of puppies, listen to “Who Let The Dogs Out” by Baha Men. What do you feel? I know you may feel annoyed, as this infectious song has likely been in and out of your head since its release more than a decade ago. But while looking at puppies, it kind of gives you an excited, carefree feeling—and you can almost imagine engaging these pups in a game of fetch. Fun, fun, fun, fun.

Next, while looking at all of these adorable images (the same exact images), let’s listen to “In The Arms of an Angel” by Sarah McLaughlin. Now what do you feel? Reminded of those sad, sad animal adoption commercials, your heart begins to sink. You may even get a lump in your throat as you imagine all of those once happy animals (three minutes ago happy) in dire straits.

Music in Advertising? What a Concept

In this experiment, we didn’t even need written dialogue on the screen—just images and sound. And what a difference the songs make. We can have fun with this kind of demonstration all day. Put on John Carpenter’s Halloween, but rather than allowing the haunting score to accompany a chase scene (with Jamie Lee Curtis struggling to flee the stalking Michael Myers), try listening to Chumbawamba’s “Tubthumping” without forever finding comedy in this horror masterpiece. (NOTE: I apologize in advance if you decide to actually do this and I’ve ruined the film for you.)

Music is arguably the most universal language known to mankind. It conveys emotion immediately—with or without lyrics. Advertising agencies are the uncrowned kings of this concept. How do you sell anything to a consumer? By conveying an emotion in order to fulfill a need. Tap into someone’s heart and mind in one fell swoop.

The Evolution of Consumer Culture

Films have effectively been using music to accompany and/or guide a scene’s visuals/dialog for years. Compare a film from the 1940s to a film from the 2000s. The amount of cuts and music in a modern film are almost obscene compared to the limited cuts and minimal soundtrack of a 40s drama. That is a result of innovation.

Is it wrong to depend so heavily on music to drive a film’s/commercial’s message, rather than relying solely on the product? Some may argue it’s one cohesive product. After all, artists tend to collect royalties from the utilization of their work in ad campaigns. There’s money to be made from all angles.

But I think it boils down to being a more aware, responsible consumer. So keep our little demonstration in mind the next time you’re watching television. Pay attention to what is truly happening. Watch the commercials on mute. How effective are they now?

Of course, there are exceptions. In all honesty, I’m always going to find a fresh-out-of-the-oven pizza appealing on television—muted or not.

Jake Pilewski is a professional singer, songwriter, pianist, producer, photographer, videographer, blogger, podcaster, and graphic designer—and an amateur culinary experimenter. He is lead vocalist for two of Toledo’s most popular bands, The New Fashioned and Nine Lives. See and listen to Jake’s incredible work at www.jakepilewski.com.