Why We Love Generation Z, and Why You Should, Too 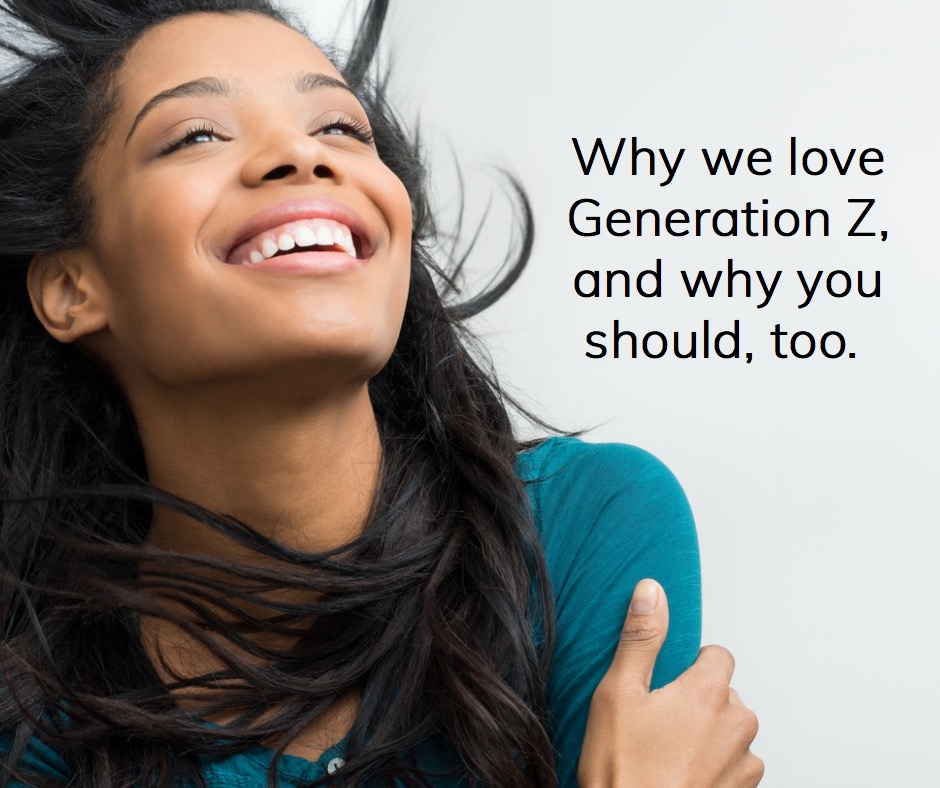 There are 65 million Generation Z members in the United States alone, and they’re shaping up to become the biggest generation of consumers by 2020. Gen Z consumers currently account for up to $44 billion in direct spending. However, their purchasing power extends past this, as 93 percent of parents report children impacting family purchases. Are you ready for this new generation of consumers?

The official age categorization of “Generation Z” is loose, generally made up of those born in 1995 and later. They are innovative, self-aware, driven, and realistic, causing them to have increasingly independent and entrepreneurial spirits. Having grown up with technology at their fingertips, they are accustomed to information being readily available.

Also known as the iGeneration, these young people were born into a fast-paced technological world. Unlike their millennial predecessors who grew up with landlines and dial-up internet, Gen Zers are used to high-speed internet, smart phones, and instant streaming. Being born into a digital world produced high expectations for speed and efficiency. As a result, they are quick workers, who engage frequently in multitasking and see the importance of constantly gaining and refining skills.

As youngsters this group has been shaped by economic, political, and social atmospheres as well. Growing up in a post 9/11 world, where school shootings are prevalent and bullying has taken on new forms, has created a generation that is highly self-reliant and resilient, unfazed by security checks or metal detectors.

Knowing the events their children have been exposed to, and that they have easy access to information and communication via the internet, parents of Gen Z have taken on new parenting styles. They seek to educate their children about the world, people, and the sometimes harsh realities of life, rather than shelter them as previous generations had done. Through this the generation has developed realistic and innovative ways of thinking, and they want to be part of the solution.

Many in Gen Z were children when the Great Recession hit in 2008, causing them to be extremely goal oriented and to desire job security. However, despite their value for security, their realistic mindsets still allow them to see failure as an opportunity for growth and learning. For example, while 72 percent of high school students say they would like to start their own companies, even though 71 percent expect their first business ventures to fail.

In terms of marketing, they have widely different values and appeals than that of previous generations. They have more tolerance for things such as race and gender and are the most racially and ethnically diverse generation as of yet. As a result marketers are having to shift their content in a direction that matches up with these ideals. Additionally, their value for realism over idealism results in their preference for nontraditional beauty standards and their rejection of the standard of “perfection” portrayed frequently in the media. That preference impacts their decisions on entertainment and media consumption, as they trade in traditional outlets for more nontraditional platforms such as YouTube, Netflix, and other video streaming sites. Seventy percent of Generation Z say they watch more than two hours of YouTube a day. The site’s growth in popularity has resulted from its accessibility, but also because of the different types of content creators are producing and their active engagement with their fan bases. Seven in 10 teenagers, who are YouTube users, say they trust social media influencers more than traditional mainstream celebrities.

Those in Generation Z are used to a fast-paced environment where they can access information and products in seconds. As a result, they are impatient and have high expectations for companies. In order to gain their business companies need to show loyalty to Gen Z customers by keeping up with their constantly evolving needs. Additionally, by allowing them to be a part of the solution, it gives them the opportunity to innovate while also showing the respect and value companies have for their customers. With much of their lives consumed by technology and social media, young consumers want businesses to keep up with this ever-changing world of technology. They expect to be offered online purchasing options, mobile apps, and home delivery.

Marketers who fail to understand Gen Z’s reality will miss out on reaching an entire generation of consumers, and their $44 billion dollars of annual spending.