Paul Rand and How to Hire a Professional Designer 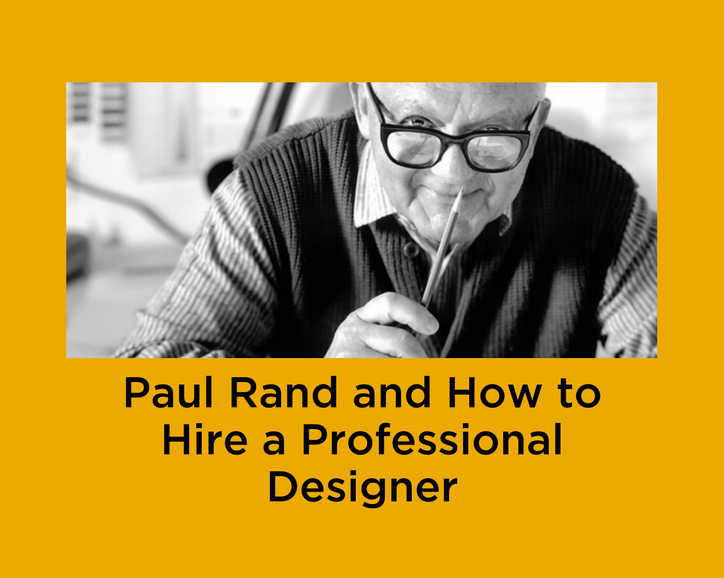 When Steve Jobs launched NeXT in the 1980s, he approached renowned graphic designer Paul Rand about creating the new company’s logo. Jobs later recalled his conversation with Rand:

I asked him if he would come up with a few options, and he said, “No, I will solve your problem for you and you will pay me. You don’t have to use the solution. If you want options go talk to other people.”

Rand’s response to Jobs’ request expresses a common frustration among designers: clients who hire them for their expertise only to ignore their advice.

Paul Rand believed that company leaders would do well by trusting professional designers to create—and implement—solutions for them, rather than micromanaging the process.

But that, Rand noted, requires leaders to be confident in their personal decision-making authority. The design process can be hindered “…by the insecure client who depends on informal office surveys and pseudo-scientific research to deal with questions that are unanswerable and answers that are questionable,” he wrote.

At The Creative Block, we’ve seen client indecision stymie more than one company’s marketing progress. Leaders get bogged down in their efforts to consider everyone’s input—and to satisfy everyone’s taste. The best case is that projects are delayed; the worst case is branding that is ineffective.

Paul Rand took his professional design colleagues to task for contributing to client indecisiveness. “The designer who voluntarily presents his client with a batch of layouts does so not out prolificacy, but out of uncertainty or fear. He thus encourages the client to assume the role of referee.”

As we like to say, most people know what they like; but expert designers know what actually works. Trust yours to provide the right solutions for you.

What happened at NeXT? Rand did indeed present Jobs with a single corporate identity concept, and Jobs—himself famous for micromanaging nearly every design detail—approved.