Skip to main content
Close Search
AdvertisingBaby BoomersCopywritingIdeas For You

Words Advertisers Should Never Use to Describe Baby Boomers 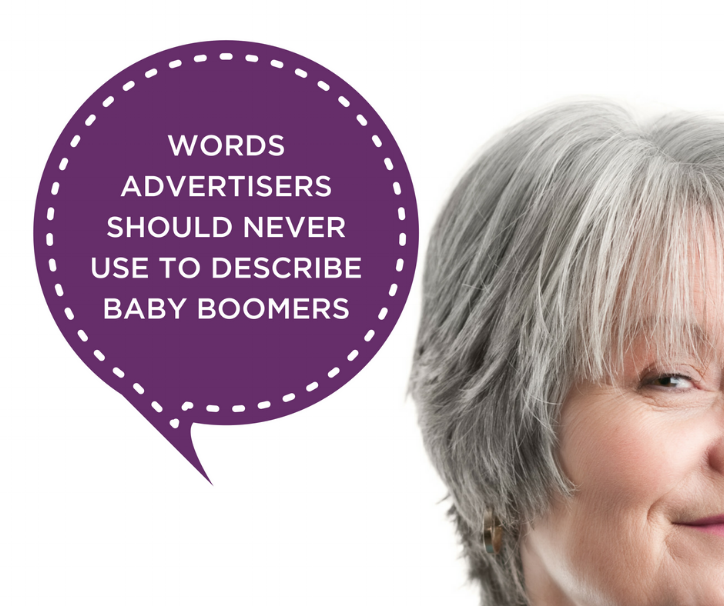 Here’s a startling statistic every U.S. marketer should know: As a generation, Baby Boomers collectively control 70 percent of the country’s disposable income. Put another way, Boomers comprise a highly influential consumer group, and advertisers would do well to target them in marketing messages. But unless they’re careful, companies could inadvertently offend Boomers with the language they use.

Baby Boomers—nearly 80 million in all—were born between 1946 and 1964, which means they range in age from their early fifties to 70 years old. Just one generation earlier, that age group was generally considered “old.” For that reason, people at various ages in that range are eligible today for “senior” discounts, AARP membership, retirement, and social security.

But research shows that Boomers tend to perceive themselves as younger than their chronological age—up to 25 years younger than they actually are. Therefore, they certainly won’t respond well to advertising that implies they are over the hill.

Boomers react negatively to standard labels, such as seniors or senior citizens, retirees, elderly or elders, older adults, or old-timers. Indeed, Boomers associate those terms with their parents’ generation.

Other common descriptors can strike Boomers as demeaning. Adjectives such as feisty, spry, mature, seasoned, or grandmotherly, convey a patronizing tone. So too do phrases that suggest someone is deviating from the norm, including remains active or still working.

So, how should you refer to Baby Boomers?

Of course, the term Baby Boomers is one option. Indeed, most Boomers take pride in their generation’s contributions to the world. The label conjures up images of Boomers advocating for peace and fairness and environmentalism. In short, it represents relevance.

But why use age-related language at all? Can’t a 60-year-old biker be an “avid bicyclist” without being “a senior on the go?”

As a group, Baby Boomers are aging. However, many are trying hard to postpone the aging process; they go to great lengths to look and feel young. Therefore, Boomers certainly don’t want advertisers reminding them that they are getting older.